Originally posted on Michael Runs the Gamut on July 25, 2012

[Comments from 2021 are in italics, enclosed in square brackets, like this one.]

For the past year or so people have been asking, “How’s your book coming?” referring to my novel. If a Butterfly. I had usually been telling them that the first draft was done, and I just needed to clean up a few issues, and polish it, and do some cutting to trim it down to size (it was up to 280,000 words at one point), but the truth was that the first draft actually wasn’t done. Not to my mind, at any rate.

There were still holes to fill, minor unexplained gaps of time, and details that were either incorrect or a bit sketchy. Back in January [2012] I read the manuscript all the way through, and it was coherent (which is a good sign), but it still had problems. I created a color-coded character frequency chart to give me a sense of how often each particular character appeared. They were done in HTML so I could open them in my web browser and look at any particular day, or week, or month in the story, and see which scenes any of my characters were in and how many pages they were occupying. With nine characters to juggle I didn’t want the readers to forget about any of them, and I also had some chapters that were extremely long (too long, too detailed). I used the chart to help me restructure and trim the story, and also wrote a chapter by chapter (very brief) description of what happened in each. Here’s an image of one day of the chart, near the mid-point of the story. 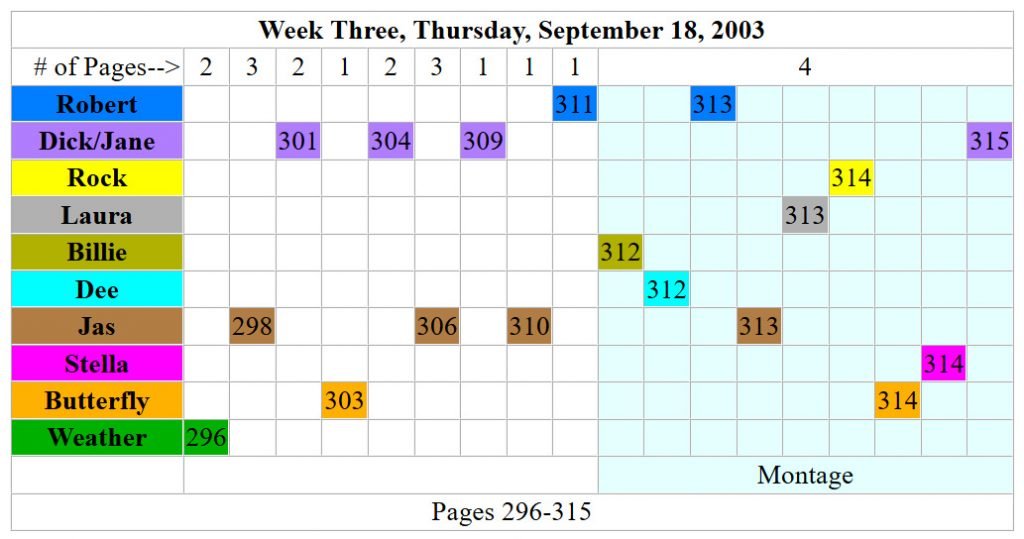 I could see at a glance that Dick and Jane and Jas appeared in this section of the book a bit more than some other characters. Color-coding the background of the cells in the montage also reminded me that all nine of the characters appear in the space of just those four pages (because the montage takes up less page space than it might appear on the chart).

I was happy with parts of the book. The first 100 pages of the story had been reworked several times, the final chapter (about 600 pages later) was absolutely finished, and all of the events of the story in between were written except for one. The Storm.

The middle section of the book culminates with several of the characters being affected by Hurricane Isabel (September 2003). I won’t say how in this post, but it was an important element. I had been researching the storm for years, and had interviewed weathercasters and people who worked at the National Hurricane Center, but I kept putting that section off because I still couldn’t figure out how I wanted to write it.

I finished that part early in June 2012, so I spent a few weeks concentrating on rewriting and practicing my pitches for Butterfly and Jagged Man, preparing them for the WLT Agents Conference. The feedback I got at the conference convinced me that Butterfly still needs more work. Everyone felt that a novel of this length, with multiple characters, will be extremely hard to sell. It’s still the novel I believe in the most, and I’m not giving up on it, but I’ve been spending the past few weeks trimming it down, chapter by chapter (and I’ve reduced it by about ten pages – out of the first eighty). I’m going to keep doing that for the next few months, but only a couple of days a week. From now until the end of the year, I’m going to work on The Jagged Man, a thriller about an 8,000 year old sociopath [it was published in 2015].

The point of this post is that, after telling everyone my first draft was finished, now it nearly is. The holes are plugged, the huge storm in the middle is written, and I know what else I need to do to finish the book.

So the milestone is this: A week ago I felt comfortable enough with the shape of the book that I could feel right about saying the first draft was complete, even though there’s a lot more that needs to be done before it’s publishable, so I finally added – 00 – to the last page.

[Little did I know that I would eventually set Butterfly aside and spend the rest of the decade writing a non-fiction book about my brother, Aggravated. As of early-January 2021, I’m doing final polishing on Butterfly again, prepping it for publication – hopefully before summer 2021.]