Once I started using Scrivener it became obvious that it could do a number of things that I was using several other programs to accomplish. Here’s an example.

In an earlier post, A Milestone, I mentioned one method used to keep track of which characters were in what scenes, and how often they were appearing in relation to other characters in the story. With nine characters to juggle (and a butterfly) it was crucial for me to have a spatial sense of where the characters were at any given moment. One of the methods I used was a Character Frequency Chart. Here’s an image of it again.

It worked fine, but I coded it as an HTML file, so I had to switch from MS Word to my Internet browser, to check the chart, then go back to the story. With Scrivener, I found I could color-code my chapter sub-sections in the binder, and see the same basic information at a glance. Look at this screenshot of a section of Scrivener’s binder and document panels. I’ll explain what those are below. 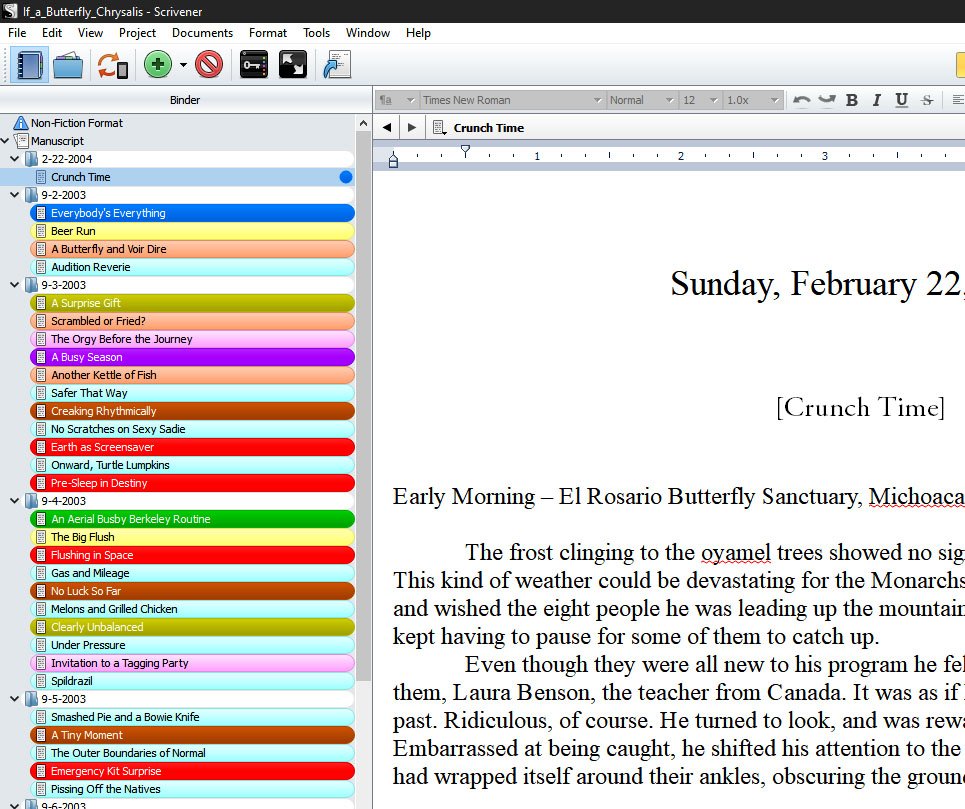 Each of the colors represent a character (or characters), so I can see in a glance whether that sub-section of a chapter (a scene, basically) is Robert’s or Dee’s or whoever’s. Scenes in dark blue indicate there are more than one character in that one.

I also created a small cheat sheet that I printed and taped below my monitor in case I forget which color belongs to which character, although the title in the Scrivener Binder column gives me another reminder of who is the POV character in that chapter’s sub-section. 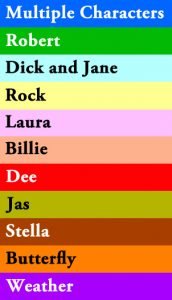 There are dozens of other ways that Scrivener is an excellent tool for writers, but I won’t go into any others in this post. I’ve barely touched on all it can do. There are tons of good tutorials out there if you want explore Scrivener further. Here’s a link to some tutorials from Literature & Latte, its creators.